Steve is a Hufflepuff and uses he/him pronouns. He is a Cancer and has an INFP personality type. 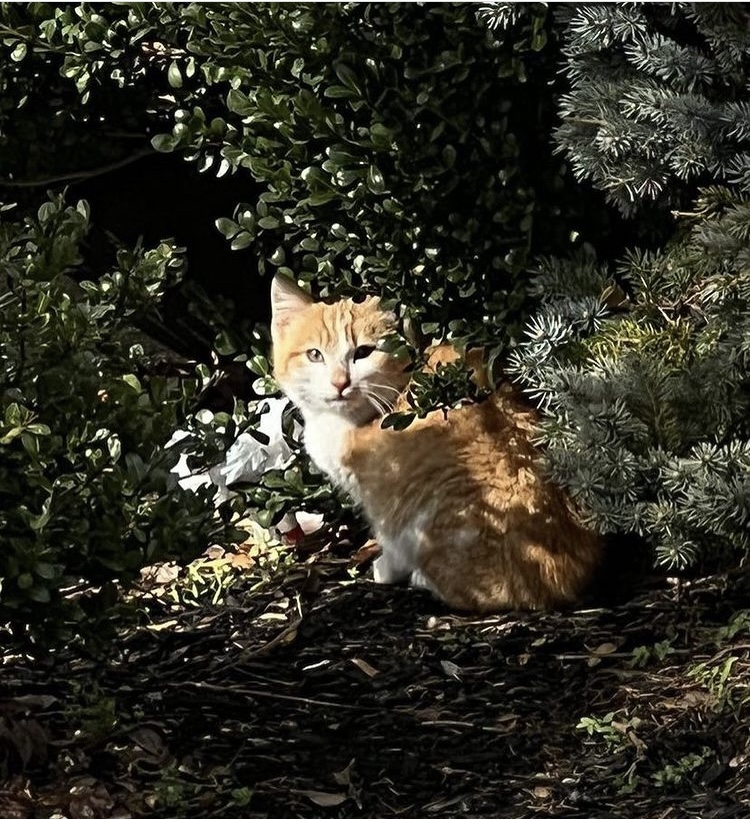 Steve spotted in the Eastern Courtyard

Recently, Eastern has gained a new school mascot! While walking around Eastern, you may spot an orange and white cat. This feline gained fame through the Instagram account, @ehsstraycat, and is often spotted in the Senior Courtyard. While we do not know where this cat is getting its food, it seems to be thriving at Eastern and has become a beloved icon among Eastern students.

The Voyager staff has voted, and we are pleased to announce the name of Eastern’s favorite friendly feline! The Eastern stray cat’s name is now *drumroll please* STEVE!

Steve accepted our offer to interview him for The Voyager and ask him some of our most pressing questions.

The second semester started recently, and Steve feels that it is going very well! Students are motivated and are striving to do their best in one of the most challenging parts of the school year. He wants to tell students to keep trying their best in their classes and keep up the great work!

Steve is a Hufflepuff and uses he/him pronouns. He is a Cancer and has an INFP personality type.

Steve was annoyed when asked about cat memes. He does not know Nyan Cat, Grumpy Cat, or Bongo Cat, and he scoffed and strutted away when I asked if he played piano. He does not seem to appreciate humans’ cat stereotypes.

Steve has rented a cat tux for Cotillion and Prom, and wants to encourage his Eastern friends to attend the dances and have the night of their lives! He is open to going to these dances, although he is not sure if he will be able to attend due to his feline status.

Steve’s favorite season is Spring! He says that it is the perfect temperature for a cat like him to thrive. Not too hot, not too cold, and full of sunshine and the beauty of nature! His pollen allergies, however, are not a fan of this season.

Steve is an avid Taylor Swift stan, and hopes that her next re-record is 1989. He says that album will never go out of style (pun intended).

When asked about the current conflict between Russia and Ukraine, Steve was very clear about the fact that he stands with Ukraine. He applauds their bravery fighting against the recent Russian invasion (although he cannot actually applaud due to the fact he is a cat).

The recent supply chain issues have made it difficult for a cat like Steve to thrive. He hasn’t been able to find as much food as he used to, and the addition of frigid cold weather has not made his life easy. So, if you see Steve or one of his stray friends, give them some cat safe food, such as melon, cooked meat, bananas, or berries. He says he would appreciate a yummy treat once and a while.

Cats like Steve need homes, so if you have the means, take stray cats you find to local shelters. This helps them to find the loving homes they deserve. Shelters nearby include the AWA and the Voorhees Animal Orphanage.

Steve is welcome to answer more questions from his fans, so if you have any questions for Steve, please ask on our Google Form! In our next edition, we will be naming and introducing Steve’s friend, the other Eastern stray cat! Thank you for reading our first edition of Speaking With Steve!