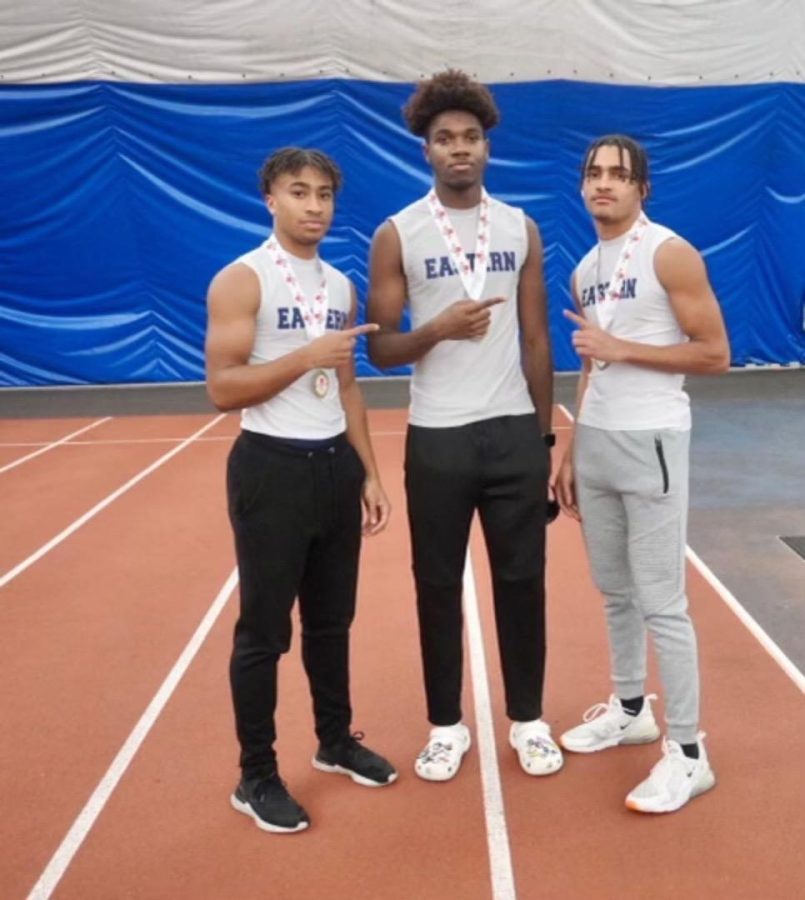 Julian Jamison, AJ Brooks, and Jashad Kersey (From Left to Right) pose for a picture after their 1st place race

The Eastern 2022 winter track season has finally come to an end, and with the spring season starting up, there’s a lot to look forward to! Sprinters, such as Julian Jamison, a junior who tore his ACL recently, but has since recovered, and Jashad Kersey,

The winter track season for Eastern was very impressive. The bonds and connections between the teammates helped improve the season outcome, along with the athletes’ overall performances. The meets easily showed that everyone had exceptional effort. Julian Jamison spoke on how big of an effect the coaches had on all the runners, “The coaches helped push all the runners to their limits in practice to prepare their bodies for the upcoming meets.

They each set up goals and standards that would help the team achieve personal and team records.” Jamison’s fastest 50m time in the winter season was 6.92 seconds and for the spring season, he will work hard to decrease his time.

Overall, all the runners expressed they had a good time while remaining competitive. There aren’t any updates on how the team did ranking wise yet, but there’s still unfinished business. Now that the spring season has arrived, it’s time for them to show off the skill and talent they gained from the winter season

Spring track is certainly more competitive than winter in some aspects so it will truly test the team’s condition and improvement. Unfortunately, Eastern started off the spring season with a loss to Cherokee 84.5 to 55.5. Jamison finished 2nd in the 100 meter dash with a time of 11.20 behind teammate Walter Clymer 11.10. The third place time was 11.50 run by Silas Davis. The 110m hurdles was won by AJ Brooks with a time of 14.30. Second place was won by Carlos Oleaga with a 16.50 time. The 200m dash top 3 was tight with all 3 being Eastern runners.Davis ran 23.00, Jamison ran 23.20, and Clymer came in third with a 23.60.

The team starting off with a loss is nothing to stress over. The 2022 team has more endurance and speed than Eastern hashad in the past few years. The spring track season is young,and there is plenty of time to turn things in the right direction!