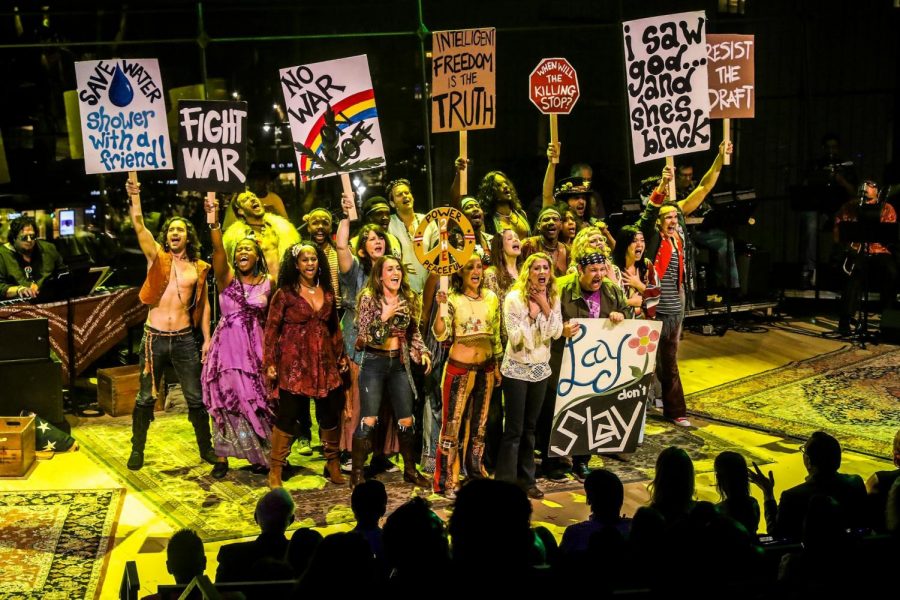 “Flow it, show it, Long as God can grow it”, lyrics to the musical’s title song pay homage to some of the staples of the counterculture movement, this being the lack of clean cut people involved.

“Hair” is the image of a torn generation. The scene is the late sixties, while tensions ran high because of the Vietnam War. ‘Hippies’ and protesters voiced their opinions on the controversial war, and soon a subculture had been created.

The premise of this production was to bring light to the youths of this moment and their lifestyle. The play has many satirical elements, as the writers wanted the audience to have a good time watching. The inspiration for the show was stemmed from what they saw around them, specifically the scene in Greenwich Village streets.

The play did extremely well on Broadway, attracting people from around the country and getting picked up at other theaters. It would later be turned into a major motion picture.

“Hair” was premiered in October 1967 at a small theater, and by next spring, it was shifted to a Broadway stage. The production made a Broadway debut on April 29, 1968. It had won over the financial backing and the support of the people, which was surprising considering the nature of the show.

The show was controversial because of how it felt about the Vietnam war, but it then explored some things that hadn’t before been shown on a professional level. The show talked about sex and drugs and even had a nude scene. At the time this was revolutionary.

This performance grew so popular, and it grew to be the first mainstream rock musical to become a success.

The music of Hair, which was written by a Grammy award-winning songwriter, had gained such momentum by itself that it hit the top of the charts. Some of the highlight numbers were “Age of Aquarius,” “Easy to Be Hard,” “Hair,”“I Got Life,” and “Good Morning Starshine.”

In 1969, the original Broadway cast recording would win the Grammy for “Best Score from an Original Cast Show Album,” and reached number one on the Billboard two hundred.

All in all, the monumental, prolific, revolutionary show is really just the world of four kooky counterculturals and a farmboy awaiting the date on his draft card. To fans however, it’s more seen as “Claude, Berger, and the tribe take on the world.”

April 29th 2018 will be the fifty year anniversary of “Hair” going to Broadway, and to celebrate it is recommended to skip the haircut, check out the movie, kick back, and let the sunshine in.