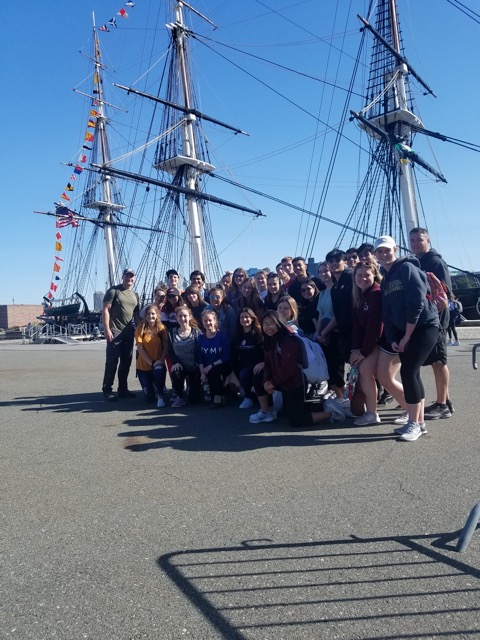 n the weekend of May 18th, twenty-nine members of the History Honor Society traveled 346 miles to Boston, Massachusetts. There they embarked down the Freedom Trail, visiting the site of the Boston Massacre, the first public school in the United States, and the USS Constitution. The following day, they headed off to Newport, Rhode Island where they did the cliff walk, toured the Vanderbilt mansion, and visited the first synagogue in the country.

The locations for the trip were chosen because “for the last three years students have expressed interest for an overnight trip to the Boston area,” said Rho Kappa advisor Mr. Richard Colton. Through running a snack stand at a 3-day Voorhees Basketball Association tournament, the club was able to raise about $600, which helped to offset the cost of the trip.

Despite the fundraising, the trip was not a piece of cake to organize. “Although many students initially expressed interest in the trip, it was difficult to get people to register and put down the full payment. It was hard to manage logistics without knowing the actual number of students attending the trip,” said Rho Kappa president Alexa Grabelle. Regardless, the officers and advisors of the club managed to successfully organize the visit.

The USS Constitution, “Old Ironsides,” offered insight into the conditions sailors dealt with when battling against the HMS Guerriere during the War of 1812. Students were able to stand in the same place they once stood and to view the limited space of their living quarters. “It’s different looking at a computer or a picture in class as opposed to seeing it in person and it offers a real academic value,” said Colton.  It’s one thing to read about history in textbooks, but it’s an entirely different, more enriching experience to see it first-hand.

The trek along the Freedom Trail allowed students to take the same steps the Founding Fathers had so many years prior. Grabelle said, “Boston is a location critical to the birth of our country.” Being the epicenter of American history, the Boston trip allowed history scholars to become more in touch with their American heritage.

The Vanderbilt mansions looked as if they came right out of The Great Gatsby (1974) movie…probably because two of them were filmed as the home of Jay Gatsby. It gave the Palace of Versailles a run for its money. With a ceiling intricately decorated and chandeliers glimmering in the halls, the mansion’s opulence left an awed appreciation of the architectural work among its visitors.   “Newport provides insights into the Gilded Age and the effects of rapid industrialization,” said Grabelle. It shows the growth of a neighborhood of mansions in just a short duration of time.

With the success of the trip, Grabelle said, “I hope that the incoming officers are able to continue past Rho Kappa traditions and launch new initiatives.” With outstanding leadership and motivation, the club was able to set its own tradition in an educational way that left a newfound appreciation for the subject among students.

Colton said, “History is the story of common American culture and to continue as a nation, we need to understand history.”