Cats: The movie that didn’t land on its feet 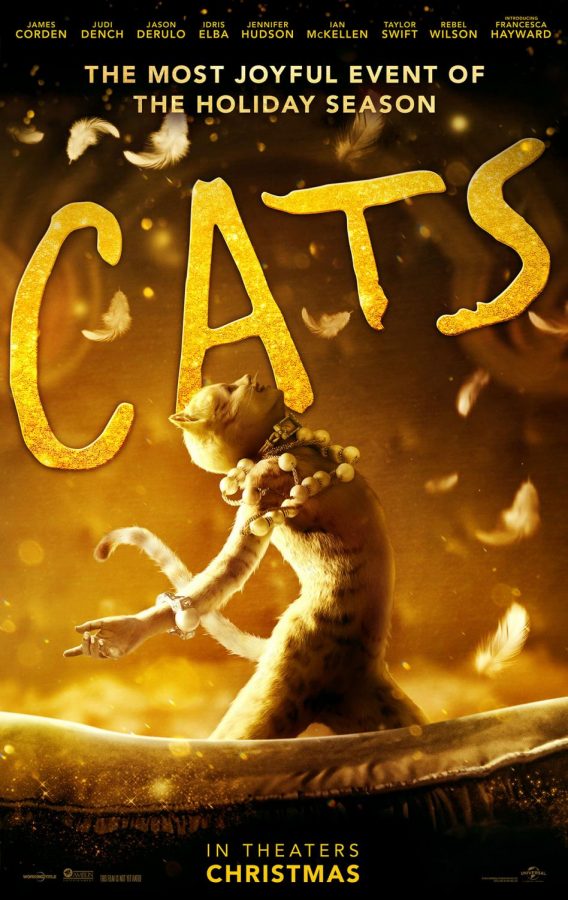 Cats: an animal that is known for landing on their feet. Cats is also a very well known musical that just so happens to have been made into a movie musical. This movie, unlike the animal, did not land on its feet.

Based on the poems of T.S Eliot, Andrew Lloyd Webber composes and writes the lyrics for the feline fanfare that originally opened on West End in 1981, with a run of twenty-one years. It then opened on Broadway in 1982, a run that ran for eighteen years, and since has had multiple successful revivals on both West End and Broadway, with the most recent in 2016.

As an avid theatre nerd, I know a lot about Cats. However, as much as I’ve tried to, I cannot like it. The lack of plot confuses me, and it’s essentially a musical about singing and dancing cats. Why are they singing and dancing? They don’t make that clear.

The movie did an even worse job of showcasing this. The movie starts off with a shot of a full moon, with a cloud beside it shaped like a cat face. That face then hisses at you, and at that moment, I knew I was in for an interesting journey.

So the movie begins. It’s all songs, with hardly any dialogue. Each new song presents a new cat, with that song introducing that cat, telling their whole life story, and why they want to die and come back as a new cat (I think that’s part of the plot?). After their song, we pretty much never see that cat again. A prime example of this is Taylor Swift.

As the center of advertising, you’d think she’d be prominently showcased in the movie right? WRONG! As Bombalurina, Taylor finally enters at least forty minutes into the movie, riding a moon down from the sky, and spraying catnip on all the other cats, drugging them all. She then begins to sing “Macavity: The Mystery Cat”, a song about ANOTHER CAT. Once that song ends, however, we never see her again. She has disappeared.

Just like the CGI in this movie. Oh boy, the CGI…It was bad. Sure, it was somewhat impressive they were able to actually do something like that. BUT, it was nowhere near purrfect.

In fact, the director of the movie, Tom Hooper, said in an interview that they did not finish the CGI until HOURS before the premiere. Additionally, two days after the film’s initial release, they sent out a new version of the film to theatres, as theatre goers had noticed flaws in the CGI. Like the cats HANDS AND FEET sinking into the floor, and being able to clearly see Dame Judi Dench’s WEDDING RING!

Ok, in my mind, cats should have paws, because they’re cats, and cats also have paws. But if the CGI on your film is not complete, and you want to present quality work to the world, simply delay the release of the film!

Though not probable, it would be better to lose money delaying the film than to lose hundreds of thousands of dollars on a bad film, where a hand is the star of a movie about cats.

There was something else rather big that turned me off from this movie, and I use that phrase intentionally. Throughout the entire movie, all of the cats began to act a certain way towards each other. It all started in “The Rum Tum Tugger”.

When Jason Derulo first enters and begins to sing, all of the cats become immediately attracted to him. They follow him everywhere he goes, and watch his EVERY move. This isn’t the only instance of this.

At random points in the film, all of the cats would get uncomfortably close together, often times rubbing against each other. What makes that even worse is the expression on their face while they’re doing it.

Meow, the performances of the actors in the movie are overlooked. Jennifer Hudson gave a heart-wrenching performance as Grizabella while crying out of her nose. Judi Dench, as Old Deuteronomy, stared into our souls as she discussed how cats are cats, and how they are NOT dogs for five  excruciatingly long minutes. And Rebel Wilson danced her heart out with cockroaches that had faces, while stripping off a layer of her fur.

The overlooked performances go on. Sir Ian McKellen gave a kooky performance as Gus the Theatre Cat, giving theatre kids the injustice they don’t deserve. James Corden was there for fat jokes, and hasn’t even seen the movie yet. And Idris Elba, as Macavity, magically meowed in and out of scenes, and during his title number, made me want to magically meow out of the theatre.

To sum up how I feel about this movie is nearly impossible. I have so many thoughts and felines and questions that this review would end up being a book if I wrote everything down. However, what I can say is this: Cats is a claw-full movie, in other words a cat-astrophe. It is a movie I will never fur-get. Un-fur-tunately, not in a paw-sitive way.