How one fitness choice changed my life in quarantine

From the depths of despair, I brought myself back up to the top with a new fitness regimen. 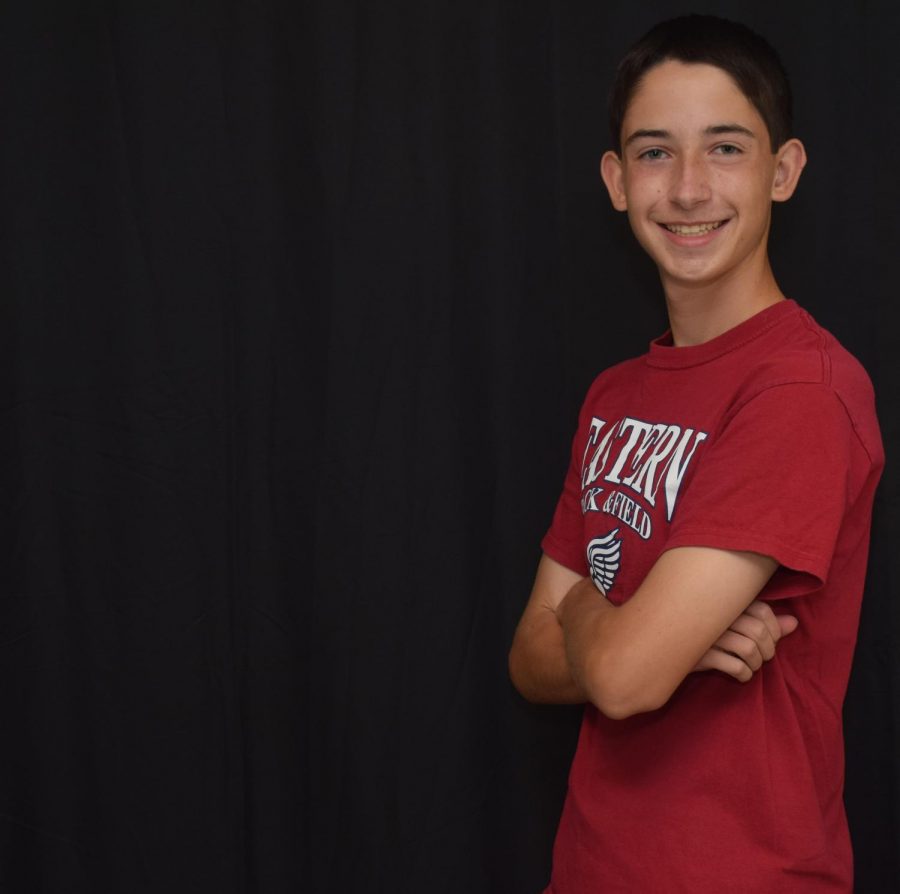 Andrew Shinkle, sports editor of the Voyager, restructured his fitness routine when quarantine put it by the wayside.

The human body does not know of quarantine.

To it, this ongoing period of self-quarantine and social distancing is like a friend betraying a friend; so unthinkable, it doesn’t even know what to do.

But in the times of COVID-19, drastic measures must be taken in order to ensure the safety of millions, and slow the spread of this unprecedented outbreak. For most people, this doesn’t sound horrible; just stay inside, watch Netflix, and put your feet up. But for the athletes of the world, myself included, it’s a death sentence.

At the onset of quarantine, the spring track season was barely a week old. We had scrimmages planned for the weeks ahead, workouts in motion, and distance runs behind us. The year was looking bright for the entire program, as we looked to bring Eastern back onto the track-and-field map.

Starting on March 16th, everything changed. Remote school was put into effect, therefore endangering the approaching track season. Official practices were halted, with the seniors and juniors organizing captains’ practices to take their place.

But after a few days, the probability of even captains’ practices taking place shrank dramatically when NJ governor Phil Murphy issued a shelter-in-place order on March 21st, cancelling all gatherings. Not being able to do the thing I loved on a regular basis really took a toll on my mental well-being, and I began to feel depressed. Not to mention, during this time I also came down with cold-like symptoms.

Whenever I get sick, I really get sick, and this time was no different. A constant cough, coupled with soreness and a runny nose made it hard to just get out of bed in the morning. Once my immune system took down the sickness, I was more motivated than ever to get myself in shape.

On the evening of March 22nd, I decided to make a change. Sitting on the couch doing absolutely nothing would not do any good for my body, so I went up to my room, and made a list of seven or so core exercises that we used to do at track practice. With plenty of rest and motivation behind me, I completed two sets of my makeshift core workout, and even got some dumbbell work in.

The next morning, it was safe to say that I was feeling the burn. But that didn’t mean that I was going to stop there. On the 23rd, I decided that I would attempt a modified version of the Murph Challenge.

A popular CrossFit workout, the “Murph” was created by Lt. Michael P. Murphy, a fallen Navy SEAL who posthumously received the Medal of Honor following his courageous acts of sacrifice during the War in Afghanistan. Consisting of 100 pull-ups, 200 push-ups, and 300 squats, all sandwiched between two one-mile runs, it poses as a daunting task even for experienced CrossFit athletes. That’s why for my first go-around, I cut the reps in half, and changed pull-ups to crunches.

For my first Murph, I set a benchmark goal of 34:30, knowing that running would be my strength.

Eager to get underway, I laced up my shoes, and set out into the neighborhood. Filled to the brim with enthusiasm, I ran an energetic 6:06 first mile. After calming my heart rate with a few minutes rest, I jumped right into the crunches. Although the day of core had weakened my ab muscles, I made it through the crunches with relative ease.

That was all about to change with the push-ups. Since I had never done more than twenty push-ups in the same sitting ever before, I was in for a rude awakening. With determination and a steady breathing pattern, I willed my way through to the end.

The squats, although daunting in quantity, were not as formidable an opponent. I felt some knee pain (and that was concerning, considering my history with knee troubles), but I survived until the final mile, which I had been viewing as a victory lap up until then.

What I had not taken into account was the weather conditions. In the first mile, it was clear and mild outside, but as I slowly peered out of my window, all I saw was torrential rain.

As I raced downstairs, I began to feel uneasy. I was second-guessing myself; would I really want to run a mile in a hurricane-like downpour? Then, I had a moment of mental clarity.

I was not going to let a little rain get in the way of my goal. I had exerted way too much effort to not cross the finish line. Giving up would go against everything Lieutenant Murphy had stood, and died for.

Like a Navy SEAL, I charged out the front door to meet my enemy; Mother Nature. The rain struck every part of my body, immediately soaking my clothes to the bone. But once you embrace that you’re going to get wet, running in the rain is fun.

For the final mile, I had ditched my watch, knowing that electronics and water are not the best of friends. But this meant that I wouldn’t know if I had reached my goal or not, further driving my ambition to succeed.

After the half-mile point, I really started to feel the pain of the previous thirty minutes, with lactic acid burning my leg muscles. Using my arms to propel my body down the rainy streets, I gave everything I had in order to make it home. To my delight, I crossed the finish line with a time of 34:38; only eight seconds off of my target time.

Now, my body is struggling to cope with the aftermath of the Murph challenge. My legs are heavy beyond belief, making even simple movement painful. But all that tells me is that I was out of shape, which I admit.

During COVID-19 quarantine, I will plan to maintain this intense exercise regimen of running, weights, and core. If you have a plan, and the dedication to follow it, there’s nothing you can’t accomplish.

As I came back through the front door, my mother remarked, as she remotely taught her piano student, “Drew is crazy.” And she’s exactly right.

To be a dedicated athlete, you’ve gotta be a little crazy.