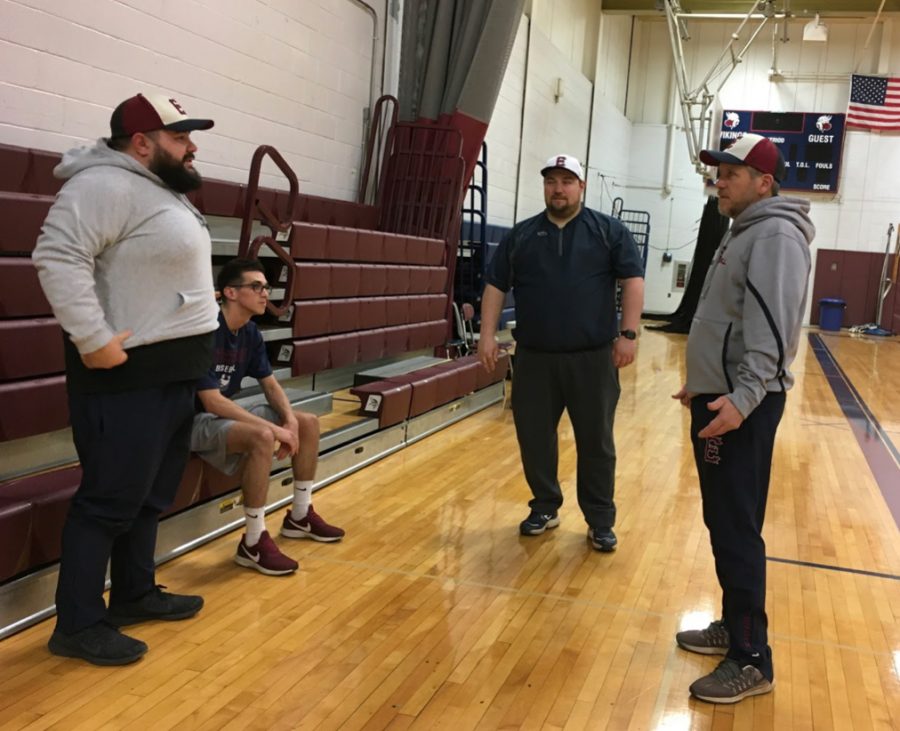 Coach Christ talks with his assistant coaches after an offseason workout.

Hi coach, thanks for sitting down with me. First off, how are preseason workouts coming along?

(Coach Christ) CC: So far so good, it hasn’t been our best year of off-season workouts, but we’re always appreciative of those players who give up themselves and work towards our intended goals.

With losses to key players like shortstop Jack Winsett and catcher Dylan Stezzi, do you guys feel you are one of the dark horses in South Jersey?

CC: I don’t think anyone would call us a dark horse, but we don’t have the depth that we’ve had in the past years and we have a couple injuries coming into the year, so I think that it will be very challenging as it always is, but maybe even more so than previous years.

After a slow start, what was the turning point of last season?

CC: When we beat Shawnee, I thought they were the best team in South Jersey, but we beat them twice and I’m very proud of that. The game we played here [12-11 win at home] we had no business winning but we scratched, clawed and stayed around and ended up winning in extra innings. I think that game catapulted us throughout the rest of the season.

Do you feel like the club has a target on their back because of the team’s year in and year out success?

CC: It’s something that I’m cognizant of but I’m not sure the players are always aware of that. When a team beats Eastern, that’s something they’re going to talk about at their end of season banquet. We’ve won consistently for a number of years and anytime a team beats us, even if they are in our conference, it’s a big deal to them. In a way, it’s very flattering, but it requires us to be at our best each and every game.

What does the team’s motto, SISU, represent?

CC: SISU is a Finnish term that represents the ability to overcome adversity and continue to battle and be victorious even when the odds are against you. Again, it emanates from the Fins and I’ve always tried to come up with a rallying cry as coach at Eastern. The Fins were wholly outnumbered by the Russians in WWII but despite that, they repelled the Russians. In Finland, SISU is something that a human possesses that allows them to be successful despite the odds.

Where do you first learn about the term?

CC: I did research, and as Vikings, I try to play on our Nordic heritage and I’ve incorporated a variety of things. Our fight song is from Led Zeppelin, which is all about the Vikings. Before that, I had another song that we used to play that was about Scandinavian and nature. I try to make the things we do thematically aligned.

What do you think separates Eastern’s baseball program from the rest of the always-competitive Olympic Conference?

CC: I’m old fashioned, and I believe in the Puritan work ethic of hard work being the formula to success. I can’t speak for other programs, but I know that I ask my players to work very hard, and I think that it will eventually pay dividends. My belief is that it will pay dividends in life, but luckily it has paid dividends on the baseball field as well.

Piggybacking off of that statement, as a coach, you are constantly teaching your players valuable lessons both on and off the field. Over the years, what lessons have you learned from them?

CC: I’ve learned to always have patience, which for any human being is always a process. I’ve also learned to never underestimate the human spirit. I have seen some kids that have surprised me in terms of their work ethic, their passion, and their desire. I’m lucky that I’ve got to watch so many talented athletes and when my players are successful and I see that unbridled joy, it makes me very, very happy.

CC: Resilient. I think that is one of the most important qualities that a human can possess. Things aren’t going to always go our way, and we have to shake it off and believe in ourselves. Ultimately, sometimes it’s not about being the best, it’s about being the last.

Coach, thanks for taking time to talk with me about the upcoming season in Eastern baseball. Good luck this year.

CC: Thank you. It’s my pleasure.

Editors Note: This article was completed prior to the COVID-19 emergency.  May the bats swing again soon!