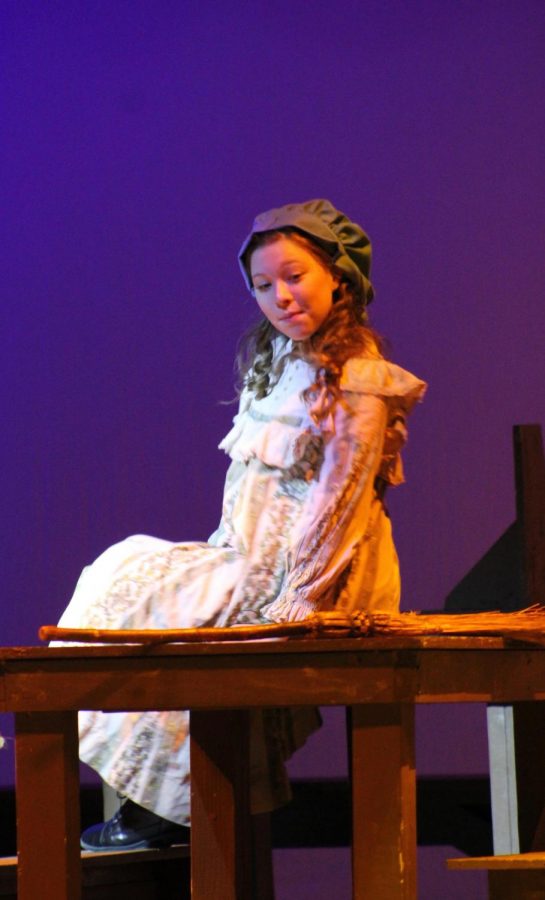 As the cast finished singing “One Day More,” we didn’t reach the final note before the entire theatre started clapping and cheering for us, some schools giving us standing ovations. The rush of giving my favorite show one final hurrah was incredible as the cast walked back to our seats to await the results of the awards.

“Every year, I watched senior speeches thinking “that is so far way for me” but senior year came faster than expected and ended so much sooner than I could’ve imagined. Having my senior year cut short only increased my gratitude for the theatre club and everything I’ve gained over these past four years.

My first show in high school began significantly better than all of my previous years of theatre: I was seen for who I actually am. I felt like a valued member of each show and Mo made me feel that I had something special to contribute, regardless of my role. This feeling was solidified the moment I joined theatre during my freshman year.

I remember after the first performance of Les Mis ended, I teared up as the final note of the finale played and the actors were bathed in white back-lighting. There are no words to describe the emotion felt after laying your heart onto the stage and hearing the roaring applause of admiration from almost one thousand three hundred people. Nothing can describe the impact theatre has had on my life.

Most importantly, theatre helped me through one of the most difficult times in my life. After being diagnosed with multiple chronic illnesses, theatre was an escape and a safe haven. There was no pressure to be perfect and my theatre family welcomed my struggles and imperfections with open arms. I was allowed to be authentic offstage and learn how to pretend to be okay onstage. I’ve used these skills every day since sophomore year to cope with my conditions and live my life to its fullest.

Since my first show, I have become a very vocal person, expressing my opinions openly and publicly speaking whenever possible, unlike my former anxious and shy self. Theatre has taught me that I am enough.

I wanted to thank Mo for his devotion to the theatre club and forcing me to get out of my comfort zone, physically and emotionally, like expressing my character’s desires as a freshman in front of upperclassman and squat-walking across the stage. You have helped me become the best version of myself and helped me achieve countless personal goals. Thank you for shaping me into the person I am and helping me find the confidence that was buried inside me.

Finally, thank you for creating a second home for my friends and I; I wouldn’t have made these incredible friendships if it weren’t for theatre.”

During their speech, the seniors also share their favorite moment. This is Alex’s:

“Performing at Paper Mill. No other experience can match the pure thrill of standing on a professional stage and performing your favorite show for everyone to see. As the cast finished singing “One Day More,” we didn’t reach the final note before the entire theatre started clapping and cheering for us, some schools giving us standing ovations. The rush of giving my favorite show one final hurrah was incredible as the cast walked back to our seats to await the results of the awards.

Throughout the night, we didn’t win as many awards as other schools but then the illusive “Best Show” approached. Before announcing the results, everyone in the cast began to hold hands and the synergy I felt was inexplicable. In previous years in theatre, no bond matched that of the casts in Eastern.

Regardless of friend groups or age, everyone was united and craved the coveted award. Finally, “Les Miserables” was announced as the best show in the state and the sheer elation was overwhelming. As we walked up on stage to accept the award, I looked around and realized how powerful and unifying theatre could be, since middle school theatre couldn’t compare. As a freshman, I learned the strength of the Arts and was inspired to continue theatre because of the pure love and familial bond in Eastern Theatre.”