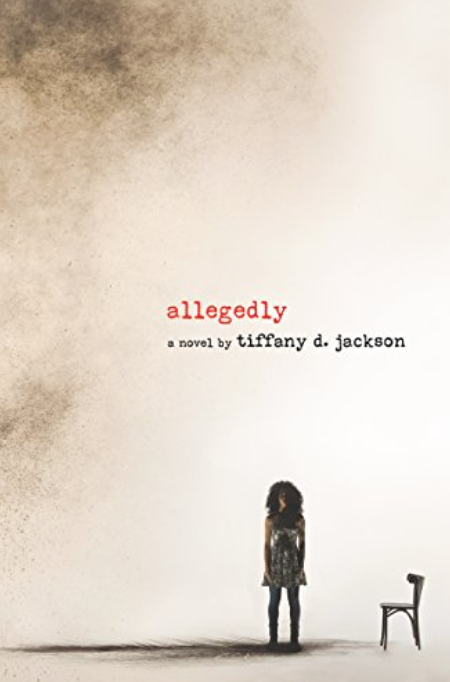 I would recommend this novel to anyone interested in true crime as it focuses a lot on the legal aspects of a murder case and the lasting mental and physical effects on a child criminal.

Kelsey Iuliano., Special to The Voyager

The events of that past year have opened many people’s eyes to the shortcomings of America’s criminal justice system. The novel Allegedly, by Tiffany D. Jackson, brings to light these failures by showing one young girl’s experience in juvenile detention. One thing the system and the media often fail to take into account is perspective; once an original account of an event is established, many refuse to accept that there could be more to the story.

Throughout the novel, narrator Mary opens our eyes to the realities of life in prison, life as a person of color, and how unfair judgment can leave certain people at a disadvantage forever. Tiffany D. Jackson’s Allegedly uses the theme of perspective to show how every situation can be more complex than it seems.

First impressions can often give an incorrect picture of one’s character and can be harmful in forming relationships with others. Tiffany D. Jackson’s novel Allegedly, which is told through the lens of a girl growing up in the U.S. prison system, highlights the importance of perspective when judging a person or a situation.

In the novel, Mary Addison was found guilty for the murder of a baby at the age of nine. Though there was evidence to suggest that the guilt may not have been entirely hers, it was quickly dismissed and Mary has been dealing with the consequences ever since. Jackson’s use of first-person narration allows narrator Mary to craft a story that purposely leaves out any details that might be self-incriminating. She ultimately makes herself out to be innocent until a surprise twist at the end.

This recurring theme of perspective also makes clear some striking issues with our justice system, especially in its treatment of people of color. Jackson, through the story of Mary B. Addison, proves that the truth can sometimes be more complex than a black or white answer.

One thing that differentiates this novel is from other works I have read is its use of articles, interviews, and other secondary sources to show what the public thought about Mary during her trial. An excerpt from the fictional novel, When Children Murder: The Mary B. Addison Trial, is quick to make harsh judgments of Mary: “When you speak of Mary, you need to understand the definition of a psychopath and how it applies to her… Mary’s dissociation from her victim, a three-month old-baby, is a sign of her true self… What kind of child would do such a thing? I’ll tell you what type, an evil one” (Jackson 204).

This author is not a medical professional and has never personally interacted with Mary or anyone else involved in the crime. She knows nothing more about the case than the rest of the public, yet speaks with superiority as she tries to diagnose Mary. The author is responsible for spreading dangerous misinformation that in turn allows people to dehumanize Mary and label her a dangerous psychopath. She fails to take into account the trauma inflicted upon Mary from both Alyssa’s death and the abuse from her step-father, Ray. Anyone with even a basic understanding of psychology would know that trauma can cause people to act out of character and even repress memories. This author is representative of how easy it is for people to villainize complete strangers based on rumors and misconceptions.

A magazine article describes the scene outside the courthouse during Mary’s trial: “Hundreds of protesters lined up… Paula McDermin, mother of four says, ‘She killed a baby! She deserves to rot in jail for the rest of her life!’… Says Tamika Brown, public relations rep, ‘They’re pushing for the death penalty and don’t even realize executing this little girl is no different than murdering that baby’” (Jackson 130).

This shows the hypocrisy of those who support the death penalty. These people believe Mary committed one of the worst crimes imaginable, but they want to murder her in revenge. We also see here how the public tends to villainize black children. The “protesters” have no faith in Mary and want to see her punished, whereas Mary’s family only wants her to get medical help so she can recover.

One can only wonder the horrific acts these violent protesters may have committed against Mary, a nine-year-old at the time, had she not been safe in custody.

This excerpt shows how easy it is for people to hate someone they do not know. We often forget that the people we see in the news are humans and that our words can hurt them. By showing the story through Mary’s point of view, Jackson makes the reader sympathize with her, subsequently making it harder to believe she committed the crime.

Throughout the novel, Mary’s mother acts as an antagonist, ignoring her daughter’s emotional needs and never forgetting to remind Mary of what an evil person she is. When it is revealed that Mary went to prison in place of her mother, it is almost enough to make Dawn’s character irredeemable. At every opportunity, Mary’s mother denies her involvement in the crime, essentially lying not only to the world but to herself as well. Most readers would want Mary to get her revenge so she can finally be free, but housemate Marisol sees the situation in a different light. During group therapy Marisol questions, “So you did a bid for your mami. Big deal! How much has she done for you?…give you life, raise you, feed you…Your life is already over. Why go f*** up your mami’s life now?” (Jackson 376).

This is a huge realization for both Mary and the reader. It would be cruel to send Dawn, a weak, mentally ill woman, to prison with other adults who would immediately gang up on her. Mary has lived through a fraction of the mistreatment her mother would experience and she could never wish that upon another person. With this new perspective in mind, Mary decides not to appeal to the courts.

She accepts that she does share the guilt of baby Alyssa’s death and she knows she will be saving her mother from more trouble than she could possibly handle.

One recurring metaphor throughout the novel is Sarah, often referred to as “New Girl.” By remaining nameless for most of the book, she represents all young girls in the prison system and is used to show the emotions those girls feel as well as the decisions they are sometimes forced to make. When New Girl first arrives, she is described as a “mousy-looking white girl” who cries through her entire first day in the group home (Jackson 12).

The reader is able to understand her fear of being around unknown people, all supposed criminals, and the uncertainty of a new place away from her family and friends. Later on in the book, New Girl is forced to team up with the house bullies to protect herself from them. Having seen Orange is the New Black, I can recognize this as a survival tactic. Being in prison can force a seemingly innocent person to become violent towards others who might not deserve it. By depicting her as human first, Jackson gives the reader a surprise when Sarah’s crimes are revealed later on.

Allegedly by Tiffany D. Jackson shows how vital it is that people closely analyze every situation before making assumptions. More often than not, people react emotionally after hearing sensitive information and fail to look any further. This is dangerous because it can allow misconceptions to be treated as fact. Jackson’s telling of a crime story through the eyes of the perpetrator makes the reader think twice about who is really guilty.

I would recommend this novel to anyone interested in true crime as it focuses a lot on the legal aspects of a murder case and the lasting mental and physical effects on a child criminal. I recommend anyone who has ever judged a situation from first impressions to read this novel and think again.