Vaccines Are The Gateway To Our Long-Awaited “Normal” 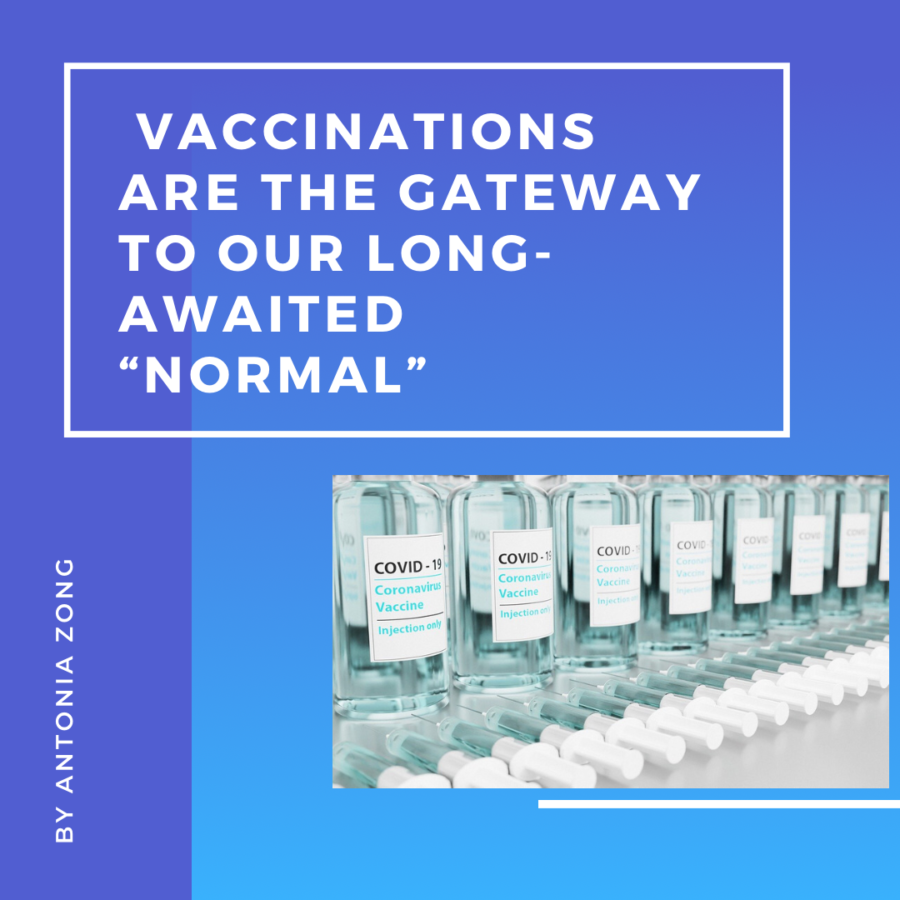 As the vaccine rollout continues, the nation is one step closer to a brighter summer.

What could a milliliter of the Pfizer vaccine possibly contain? mRNA, most likely. Proteins? Definitely. But conspiracy theories of a microchip being embedded in the vaccine could be pushing past the boundaries of mere paranoia.

As of May 1, all adults will be able to access a vaccine at their nearest vaccination site throughout the nation. As such, the U.S’s position among other countries has actually drastically changed in a matter of months. What was once a nation sagging under the constant increase in Covid cases is now the world’s largest vaccine bank.

As compared to countries with no vaccines at all, the U.S is now sitting on a surplus of Covid vaccines, with numbers nearing the billions.

So what does this mean for U.S citizens, both young and old? Of course, one would expect Americans to sign up for their dose as quickly as possible.

However, American society has shown significant amounts of stigma since the earliest distribution of the vaccines, whether it be justified or not.

Listening to the unjustified argument will ultimately land the conversation in the realm of conspiracy theories brought upon by humanity’s lust for the theatrics.

In May of 2020, Dr. Anthony Fauci and Bill Gates were accused of fabricating this destructive virus to profit from the vaccines that would come later. This conspiracy theory stemmed from a video, Plandemic, that began circling around social media sprouting rumors that the virus is man-made.

When platforms such as Twitter and Facebook removed this video for fear of spreading misinformation, those who sought drama and conspiracies took it as undeniable proof that the content of the video was real.

While the effect of these conspiracies was by no means physical, the growing wariness that it leaves in the general public could be detrimental to the nation’s health.

The medical field as a whole could also suffer if this stigma were to spread as quickly as the virus itself. If the vaccine was seen merely as economic profit, trust in the nation’s doctors, scientists, and government officials would drastically decline.

Dr. Anthony Fauci holds a position in this country where he has the responsibility of dealing with the nation’s most pressing medical matters. If such rumors circulated around the integrity of this medical professional for a brief minute of amusement, then the integrity of the country will fall as collateral damage.

However, the stigma behind this virus also has a legitimate, scientific reason as to why some people are wary of this vaccine. Contrary to the baseless accusations of conspiracy theories, the speed of which the vaccines were developed has caused a fair amount of caution in the earlier months of 2021.

True, the world was on the brink of collapse in the midst of the pandemic mid-2020, where it’s understandable that the development of a vaccine would take up a significantly shorter time than others.

But the loss of that time, of course, could result in an oversight of the potential errors that come with too much hastiness. Drug development usually has to pass four stages in order to be approved by the FDA (Food and Drug Administration). Although phases 1 and 2 don’t need more than a few years, phases 3 and 4 are the most time consuming.

Phase 3 of a clinical trial involves a few thousand participants, where the primary goal is to test the drug’s effectiveness in comparison to other treatments under the same conditions. These four phases combined could take up to 7-10 years.

As such, it’s understandable that individuals such as scientists would hold reservations toward the sudden approval of the Pfizer and Moderna vaccines.

But as April approaches, there are tell-tale signs that these two vaccines have held strong against the world’s probing eyes.

As the vaccine rollout accelerates, more than 43 million Americans have already received their doses of the vaccines. And as this small, but significant, 13% of the American population have been vaccinated, Covid-19 cases are finally starting its long awaited decline.

Although caution shouldn’t be thrown to the wind quite so easily, the “normal” that the world so desperately desires will only be achieved as these vaccines break through waves of stigma.