Out of the one month of the year, read a Black book by a Black author. 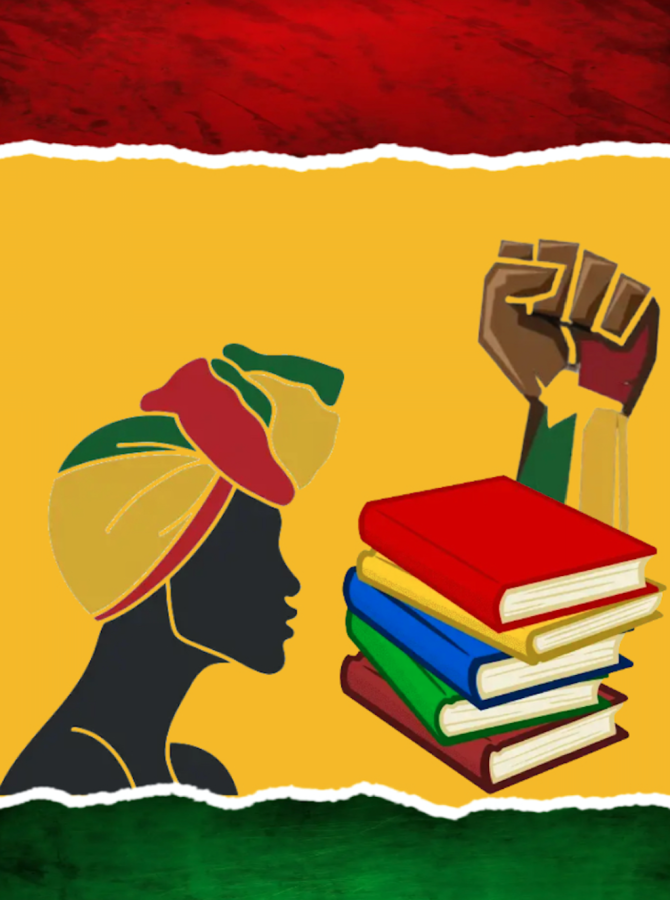 Two things might come to your mind when you hear the month February: Valentines Day and Black History Month. In 1926, the shortest month of the year was chosen by Carter G Woodson to not only celebrate Black excellence and progress, but also to acknowledge 400 years of oppression.

This annual celebration was to raise awareness to the upcoming yet deep rooted history of African-Americans and learn about their effects in schools. However, the depressing truth is that most schools won’t even acknowledge this month as anything other than Valentines Day on the fourteenth, and some history teachers certainly won’t interrupt their strict lesson plans to discuss topics that occurred “too long ago.” Isn’t that the point of history, though?

With a state legislator in Texas banning a list of 850 books because students may feel “discomfort, guilt, anguish or any other form of psychological distress” and Florida also banning a list of 16 books for “obscene materials” (as if they’ve never walked around in a public high school to hear the obscene things being said there), I am recommending you ten books you should read by Black authors this month for Black History Month.

Concrete Rose by the New York Times bestselling author, Angie Thomas, is a prequel to her debut novel The Hate U Give which sold 182,981 print copies. Thomas grips us through her story-telling in this coming-of-age story about 17-year-old Maverick, who we knew as Starr’s father in The Hate U Give, learning what it truly means to become a man when he becomes a father as a teenager. I remember the whirlwind of emotions I felt reading this book. Trust me, you want it in your hands.  (January 12, 2021).

Love Radio by Ebony LaDelle is a YA romance, pitched as Hitch meets The Sun Is Also A Star. It tells the love story of Prince Jones, a teenage boy who has his own radio segment, of course called “Love Radio,” meeting Dani Ford who isn’t looking for love, but the connection between her and Prince could set off fireworks. Can you guess where it goes? Don’t just guess. Read the book! (May 31, 2022).

Libertie by Kaitlyn Greenidge paints the story of grace, elegance, and struggle in the search for freedom. In Reconstruction-era Brooklyn, Libertie Sampson, the daughter of a Black female physician, is urged by her mother to become a doctor, but Libertie would rather pursue music. So, when a suitor from Haiti proposes to Libertie promising true equality on the island, she accepts, only to discover that she is far from living the life of freedom she craves. I have yet to read this book myself, but we can read it together! (March 30, 2021).

The Color Purple by Alice Walker documents the traumas and gradual triumph of Celie, an African American teenager raised in rural isolation in Georgia, as she comes to resist the paralyzing self-concept forced on her by others. Celie narrates her life through painfully honest letters to God. This book does talk about the hardships of growing up in the South, so I would advise it for mature readers. After you’ve read the book, you can also watch the film starring the very well known Oprah Winfrey.  (1982).

Between the World and Me by Ta-Nehisi Coates is written as a letter to the author’s teenage son about the feelings, symbolism, and realities associated with being Black in the United States. My English teacher introduced this book to me, and I fell in love with it. Talk about an eye-opener. It’s a must-read, especially for Black History Month. (July 14, 2015).

The Other Black Girl by Zakiya Dalila Harris tells the story of two young Black women, Nella and Hazel, meeting against the starkly white backdrop of the New York City book publishing industry. While working together at Wagner Books, they’ve only just started swapping natural hair-care tips when a string of uncomfortable events elevates Hazel to office darling, and leaves Nella in the dust. Just the name of this book had me rolling with excitement. It sings Black History Month. Or maybe that’s just me, but this book is definitely on my to-be-read list. (June 1, 2021).

Beasts of Prey by Ayana Gray brings to life the lack of Magic in the broken city of Lkossa, especially for girls like sixteen-year-old Koffi. Indentured to the notorious Night Zoo, she cares for its fearsome and magical creatures to pay off her family’s debts and secure their eventual freedom. Koffi and Ekon enter the magical Greater Jungle in pursuit of a murderous creature called the Shetani. Pushed and marketed by publishers, I couldn’t blink without seeing this book splattered everywhere and rightfully so. Ms. Gray takes us to another world — a world of black people and I believe that should be celebrated. (September 8, 2021)

Love in Color by Bolu Babalola colors the love story of a high-born Nigerian goddess, who has been beaten down and unappreciated by her gregarious lover, longs to be truly seen. A young businesswoman attempts a great leap in her company, and an even greater one in her love life.  “Black love!” “Black love!” That’s what this book chants and I’m here for it!(August 20, 2020).

Seven Days in June by Tia Williams shows a beautiful love story following Eva, who’s juggling her career and single motherhood when she reconnects with the love of her life, Shane, who’s now a famous literary author. However, Eva’s not sure she can trust the man who broke her heart, and she wants him out of her life — after she gets some answers, of course. More Black love? Let me get my heated blanket and cream cheese bagel to enjoy this! Join me if you will.  (June 1, 2021).

Ace of Spades by Faridah Àbíké-Íyímídé is a compelling, debut thriller about Devon and Chiamaka, the only Black students in Niveus Private Academy, whose lives are turned upside down when an anonymous texter, known as Aces, brings their dark secrets to light. With heart-pounding suspense, Faridah Àbíké-Íyímídé’s novel delves deep into the heart of institutionalized racism. I love a good thriller, and to have a book where black teenagers are the main characters — the forefront? Give it to me. I promise I’ll give it to you to read too. (June 1, 2021).

The list of books here are just recommendations from me. There are so many other Black writers out there, spilling with ideas to not only express the effects of Black trauma, but also embolden Black love, Black joy, and Black excellence. Don’t just do it for this month. Pick up some of these books any time out of the 365 days of the year and don’t let old white men silence the importance of BIPOC history, especially when they’re being told as stories.